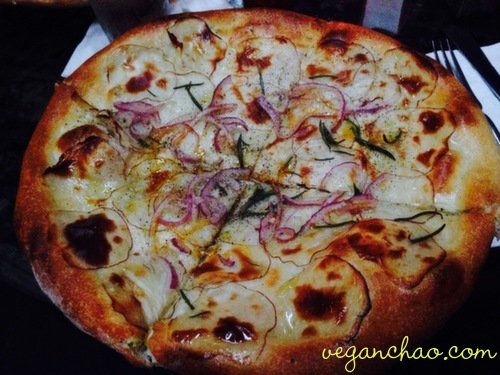 There’s something about eating food around plants and verdant greenery that elevates it to an almost zen-like state. It’s like how Earth Balance Cheddar Puffs fit perfectly between my tongue and chompers — just meant to be, yanno what I’m talkin’ bout?

Except, eating in La Lanterna’s garden area is probably better than eating in actual nature. For one, there’s no bugs or risk of getting eaten by bugs. For another, you can feel like you’re outside — without actually being outside!

“The Garden” as it is simply called, is kind of like a mini-greenhouse. The space is made to look like an earthy, cozy and natural nook, replete with actual trees fashioned into Tiffany-esque lamps and real plants.

There’s even an adorable waterfall tucked away in one corner of the garden!

This one-of-a-kind ambiance makes La Lanterna an awesome date spot. There’s a definite romantic vibe going on… and even if you can’t get a seat in the garden, the super-dark regular foyer has a working faux-fireplace, which isn’t too shabby either.

Basically, I had been told by a previous waiter that I could swap the two pre-existing ingredients on the already vegan patate & cipolla pie for other toppings, at no extra charge. When it came time to pay the bill, I got two ingredients tacked onto my bill at $3.00 each. By that time, the original waiter I made the order with already left, and it was quite a taxing order/ordeal to finally sort out and settle the bill.

Word to the wise: don’t try to swap toppings!

This pie is the only already-vegan pie available on La Lanterna’s menu. While you can opt to go cheese-free on the Pizza Margherita, Boscaiola and others, it’ll be around $1.50 more for the vegan version (since you are paying regular price), and less toppings.

Having said that, I really enjoy noshing down on this pie. It is perfectly crisp, with plenty of baked air bubbles throughout the edges of the crust and in the pie itself.

The paper-thin potatoes really melt into the crust, giving it an almost cheese-like taste.

If you’re a crust-lover like me, you’ll definitely enjoy La Lanterna’s take on a personal pizza.

Presentation-wise, the pie comes on a plate that is way too small for it, causing the edges to spill off and slide around if you try to cut the pie.

Personally, I wish they’d get bigger plates, but maybe they do it on purpose to make your pizza look bigger. Their tables are also pretty damn small though, so that might be another reason.

If you’re looking to get full off of La Lanterna’s soups, don’t get your hopes up. Though quite tasty, this soup did not really fill me up in any way.

The soup was mostly broth, and I did wish it contained more vegetables. If you are just looking for a straight-up appetizer, then go with it, but don’t order this soup expecting a tummy-filler.

Overall, I love going to La Lanterna for the cozy ambiance and when I have a pizza craving. Tip: buying a $100 giftcard will get you a free $15 one! I do it a lot because I always come back here for seconds!