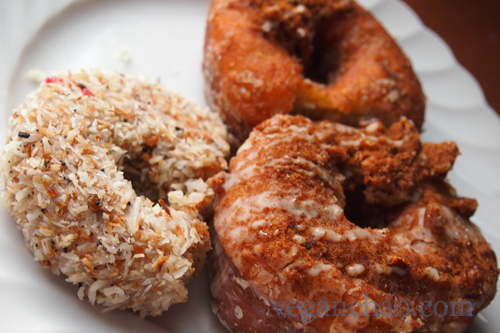 Sometimes the universe astounds me: I’ve had really good food, really shitty food, and just plain ehh food at more brick-and-mortar restaurants than I can count. So I didn’t really expect too much from a vegan food truck– I mean, if a permanent building with a permanent kitchen can’t even turn out a decent entrée, why should I expect a food truck to?

Luckily, the Cinnamon Snail truck proved me wrong. Not only did they prove me wrong— but I think I died and went to vegan dessert heaven! Best of all, they were giving out free donuts– and I fully indulged, duh!

I had three of their many flavors of donut: coconut, cinnamon pecan and plain.

Coconut was by far the most moist, but the cinnamon pecan was also incredibly delicious: the contrast of the pecan with the sugar glaze and cinnamon tasted great when dipped in Silk. The donut base was a bit dry on the cinnamon one though.

The plain donut was also stellar, and not as dry as the cinnamon one was. Overall, at $2.00 a donut, it is a bit pricey but a good treat for sure!

This pastry was my favorite of the batch— it reminded me of those Entenmann’s cheese danishes, except waaaay better.

The pastry body was flaky, buttery and had some sugar crystals sprinkled atop it, which really upped the flavor quotient. The filling was a delicious combination of vegan cheese-danish creme and raspberry jam, which was a bit tart and played well against the sweetness of the overall pastry. I think I probably could have eaten 15 of these, though I probably really shouldn’t…

A vegan apple turnover is like the unicorn of the vegan world— I really haven’t seen them at all in any retail stores, though admittedly, you’d probably need to go to a specialized vegan baker anyway.

Anyway, this turnover was almost as great as the Pink Lady pastry– it was just as flaky, dusted with sugar and delectable as it looks in the picture!

You could tell that the pastry was freshly made, since the apple filling just had that freshly-baked taste. I gobbled it up in the record time of .0004 seconds… it wasn’t big enough to satisfy my apple-turnover deprived self.

Awesome to pair with a steaming cup of earl grey. I think I need to start finding recipes for my own, I can’t schlep over to the CST each time I crave these…

The only thing I wish was that there was more filling, as it seemed like there was only 3 tablespoonfuls worth. Still, the taste was stellar and I would definitely buy it again.

Now if only the CST team would just become my private chefs slaves for life, I would be forever happy and never hungry. A girl can dream…