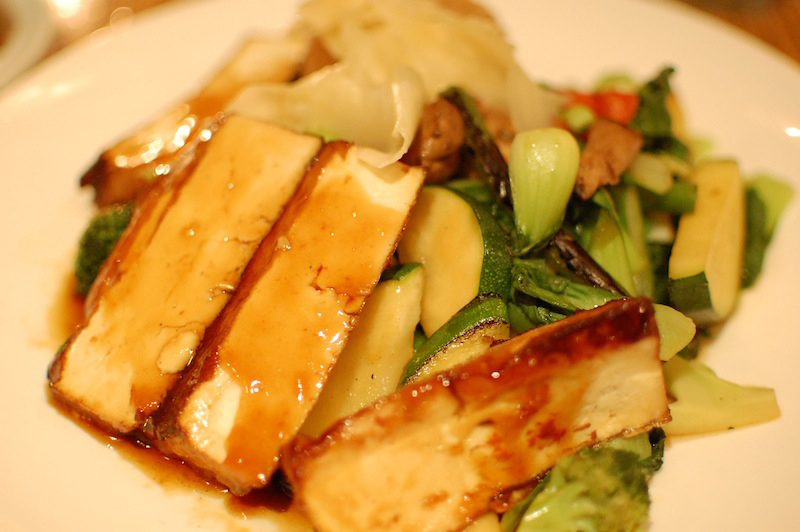 As much as I enjoy giving out raving reviews, some places simply don’t deserve it. And Josie’s on the UWS fits this category to a T.

I always find it funny that a restaurant that looks so fancy and welcoming can have such deplorable food and service. It’s almost like, “Hey, we spent so much money making this place look spiffy, we can just stay in the back of the restaurant, talking amongst ourselves and ignoring the needs of the customers because they will be so awestruck by the decor that they won’t need any water, or food for that matter.”

Though even if I find the waiters reprehensible I still tip them, since I’m not that soul-less.

Anyhow, the ambiance is, like I said, quite nice and a lovely place to take a date, but it ends there. Basically you would be better off buying your food somewhere else and don’t expect too many refills on water (since the waiters like to commingle in the back to forget about their oh-so-hard jobs of walking a pitcher of water to each table) and bringing it here to eat just for the atmosphere. 4 out of 5 carrots for ambiance. 1 out of 5 for the service.

The free bread and spread was actually the best part of the meal, besides the fact that it was ice-cold. You can choose from a basket of focaccia, 5-grain, or cornbread. Oh, and they apparently can’t warm it up for you because they “don’t have a microwave.”

Last time I checked, every kitchen had an oven. Though maybe they don’t really use it, since I’m guessing this bread may have come from some surplus bread-distributor. Lazy hipsters. The bread came with some cold sweet potato spread (see a trend here?), which was pretty straightforward: mashed cold sweet potato. 3.5 out of 5 for the bread and 2 out of 5 for the spread.

So here we have the “All Veggie Meatloaf: organic lentil, seitan, shiitake mushroom & sweet potato loaf with miso gravy & wok-sautéed greens… for 15.75.” First off, as much as it sounds good on paper, this concoction was anything but. Mushy, disgusting, bland and flavorless, it tasted like something a 6-year old toddler could make out of play-doh, and it would’ve tasted better too (though not recommended).

There seemed to be more sweet potato in this than anything, as I could barely taste the seitan or mushrooms. It seems they soaked the whole loaf in gravy because it was supremely doughy and un-appetizingly soggy. The side of bok choy was a feeble, haphazard attempt at adding another vegetable to the plate for sake of presentation, but it was wilted, overcooked, and not seasoned at all.

I should also mention that they happened to stick a piece of yam in the middle, perhaps to imitate a bone? But it just looks silly and seems like a lazy attempt at being inventive. Totally disappointing and a waste of $16.

They didnt even bother to drain some of that gross fluid off.

Next and last (I didn’t even want to try dessert, not that I could, since they don’t have any vegan options), we have the “Seared Asian Tofu Stir-Fry: wok-sautéed string beans, broccoli florets, zucchini, cremini mushrooms, bell peppers & baby bok choy with organic tamari brown rice… for 14.75.” Again, this was a sorry attempt at vegan cuisine, with the ingredients half-heartedly chopped, thrown and swirled in a pan for a few minutes, then drizzled with some commercial soy sauce-liquid.

It was pretty bland and altogether too simple to warrant such a price. Really, Josie’s? You guys try so hard to seem classy and elegant, and you present us with THIS? I am appalled and ashamed. At least the waiter was honest when she said that they really didn’t have that many vegan options to choose from. So I guess it’s my mistake for choosing this ill-fated meal. Maybe I shouldn’t stay out so late! 0 out of 5 carrots.

In defense of this establishment, Josie’s is really not suitable for vegans. 90% of the dishes are non-vegan, organic animal products and they simply have one section for vegan/vegetarian friendly dishes. So pass if you are a veg, for sure!