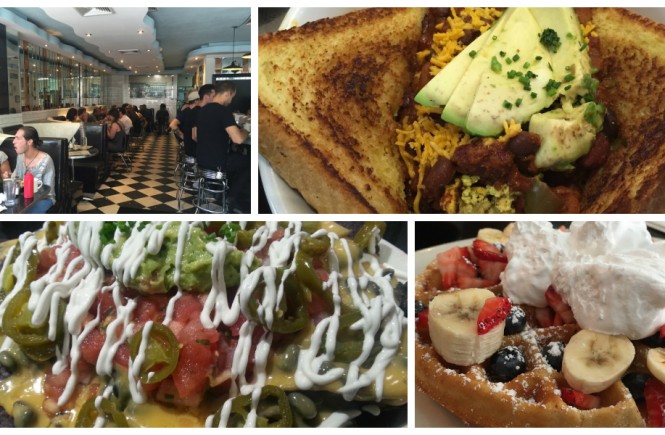 Oh, Brooklyn: my love/hate relationship with you will probably endure as long as metrocard inflation. Even though I hate your hipster ambiance, I have to admit, you do have ridiculously tasty vegan food. And Champs is about my favorite hipster-owned vegan joint I’ve tried so far.

I’m definitely not the only person who likes Champs — place is always packed with folks wanting a delicious, probably just a little nutritious and endlessly tasty vegan fare. I always have to fight for a table when I go, even on a weekday. Too many goshdarn hungry vegans in this ‘hood!

What I don’t like is the blaring, more-distracting-than-a-cool-factor rock music that permeates my ears when I choose to dine here. Forget about asking them to lower the music — you may as well as to have a side dish of vegan fertilizer with your entrée. Just grin and bear it.

*update: during my last trip, they did lower the volume a bit so I could hear myself think. Thanks dudes! I’d rather not take my meal with a side of earache, much obliged!

The service here is nothing too spectacular — the staff are all 20-something hipster vegan chicks with at least two cutesy, ironic tats on some visible appendage. They’re nice, but not overly so. I didn’t exactly get a warm vibe from them by any means.

Oh, and quick tip: if you see a sullen, blond braided waitress working the bar counter who looks like she hates everybody, her name is Haley. And she’s absolutely awful. Doesn’t smile, and if you ask her for something, she says she’ll get it, then totally doesn’t. Haley, I’m keeping an eye on you… so I never ask you for anything. Just a friendly warning!

One of my favorite things to put in my belly has got to be loaded nachos… even before I turned vegan, I loved, LOVED eating that ooey, gooey, slimy and creamy concoction of hot melted chips and cheese. Now that I’m vegan, my nacho consumption has certainly tapered off by quite a bit — and to be honest, it’s probably for the better.

Champ’s version of nachos has all the yumminess of real nachos, minus a bit of the guilt, simply because it’s vegan. Plus, it’s chock-full of guacamole and comes with blue corn tortilla chips — blue means I get to say it’s healthy, right?!

“Country fried” anything already sounds amazing to me, so it was a no-brainer that I’d adore this sandwich. The seitan was satisfying, tear-inducingly crispy with the perfectly deep-fried bread crumb butter crust, while the moist seitan inside had a savory, succulent and amazingly textured consistency. Add that to a layer of perfectly melted daiya cheddar, mayo-ranch sauce and a tart vinaigrette side salad, and you have one of the best vegan sandwiches I’ve personally had IN MY WHOLE LIFE. I think it’s my favorite actually – and I don’t take my vegan ‘wich game lightly.

The pièce de résistance of this sandwich is most definitely the thick, perfectly browned, crispy soft Texas toast. It reminds me of the sliced square Chinese bread I used to love but had to stop eating because it was unvegan.

Champs has resurrected my love for that bread in the best way – cradling that luscious, thick slab of vegan protein. How do you like them apples?

Vegans know that finding a place that serves Belgian waffles a la veg are few and far in between. Adding to that, having a dish of savory Belgian waffles at your disposal is almost impossible. But after my first trip to Champs, I now believe anything can be veganized. Thanks Champs, for fulfilling my vegan dreams! I’ll thank you with frequent diner amenities – which include a pool of drool on my table, a napkin stained with lipstick and oil, and my paltry tip, since I want to use that money on actual foodstuffs (just kidding) (not really)!

Seriously though, this waffle combo is the bomb-diggity. I love me some country-style vegan cooking, and this combines the best of both worlds – vegan (so its not grossly unhealthy) + southern (kind of an oxymoron if you think about it). Everything about this dish works in symbolic harmony. The tofu scramble’s salty/savory soft taste goes well with the slightly bitter kale. The home fries pair well with both. And the fluffy, you-could-never-tell-it’s-vegan waffles taste great with everything. I loved adding maple syrup to my waffles to up the ante, as I’m a huge salty-sweet fan. Portion-wise, it was absolutely perfect: didn’t leave me too bloated, and yet gave me a satiated feeling that lasted awhile.

If you’re looking for that Parisian fruity, brunch-style waffle, this is it. The buttery waffles – which I would honestly eat everyday if I knew the recipe – make an obviously perfect base for the fresh bananas, strawberries and blueberries that are served on top.

Yet the best part is probably the huge dollop of whip cream (from Hanan) and the delicate sprinkling of powdered sugar. It truly “tops” and elevates the already-scrumptious waffles to new heights.

Vegan croissants are another uber-rare delicacy for me—it’s something I’ve put on my “don’t even bother remembering” food list of omni yore long ago. The closest food item I’ve had to a bonafide croissant was the Apple Turnover I got from the Cinnamon Snail truck ages ago. That’s pretty pathetic, considering it tastes nearly nothing like one!

Anyway, I was more than happy to devour my first vegan croissant. While it wasn’t as flaky, airy or buttery as a traditional croissant, it was pretty tasty. The dough was denser than I expected, and it reminded me of a butter biscuit in the shape of a crescent. I liked it, but I’m going to continue my search for the perfect flaky, soft and buttery croissant I remembered.

As an Asian chick growing up in an old-school Taiwanese household, I never got familiar with the concept of “eggs Benedict.” To me, eggs came in three forms: tea-boiled, scrambled with tomatoes, or fried with runny yolk (which I hated) and treated to a light drizzle of soy sauce. So this was my first “eggs benny” experience, and since I have no litmus to compare it to, take that how you will!

Eggs benny fan or not, I was completely enamored with this dish. Not only does it have wayward circles of seedy green and red jalapeño which I adore in t a fried-tofu dish, but the sides of grilled seitan strips and home-fried yucca cubes (that at first glance I thought were pineapples!) really elevated it from a basic brunch to an unforgettable flavor adventure. I also loved the creamy green sauce they smothered the “eggs” in.

Anything with the words “vegan chili” in the description is guaranteed to catch my attention. Of course, I’ve already waxed poetic about the wonders of Champ’s Texas toast, so it helped that this menu item had two thick slices of toast on both sides.

Champ’s chili has a complementary mix of tomatoes, beans and bell peppers that isn’t too spicy and has a nice balance of moisture-level which is pretty much the only thing you can truly mess up when you make chili. The chili tasted like it had consistent flavor throughout, meaning it was thoroughly cooked.

Now, every restaurant has one weakness and here is Champs. This smoothie was bland, wasn’t pleasant to drink, and looked un-enticing as well. Basically, it tasted like a bitter avocado-lime slush with 60% ice. I ordered twice, by mistake the second time, since I forgot how much I didn’t like it. Won’t happen again!

Dessert, in my opinion, isn’t Champ’s forte. This cheesecake was pretty bland and uninspired – it needed more sugar.

After all, people don’t consume dessert to be healthy, so it shouldn’t taste as such. The body of the cheesecake was passable, nothing special. I did like the oatmeal crust though – it crumbled well and tasted fresh, plus it complemented the plain filling.

Champs is now one of my mainstays, simply because their food is excellent. I dream about it. I crave it when I wake up. If Champs was a man, he’d be my soulmate, because I’d eat him up all day, everyday. Isn’t that what true love is all about?

PLEASE Champs, make another location in Queens or Manhattan, so we can be together FOREVER! 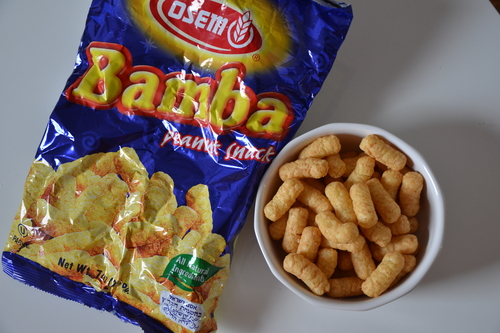 The story of the Bamba puff and me dates back to my first job as a bagel saveur (ie: bagel cutter, spreader, butterer and all-around cafe slave), when my boss’ sister told me about a “delicious Israeli snack you would love.” Our conversation went something like this: Me: I really love Israeli juices. Boss’ Sister: […]