This weekend, I decided to make a dish that I often fall back on when I get seriously hungry. The recipe, Three-Flavor Pancit, is from Vegan Planet (search for “pancit” in the Amazon preview, and the shot of the book is right there on page 260, how convenient), a book I like to use mostly for the Asian recipes (another good recipe from that book is the Corn Chowder, which is a great appetizer and goes awesomely with a Triple Baguette from Eli’s on 81st and 3rd… ps: the Double is the same price as a Triple baguette there, just a heads up! More bread for less dough! :) )

The recipe is basically a stir-fry, vegan version of Pad-Thai, and is endlessly satisfying, since it is chock-full of protein and fiber.

One crucial thing is to fry each ingredient separately, and be mindful of how much oil you add, since you do want to add sesame oil at the end for flavor (it doesn’t say when to add the sesame oil in the recipe itself, which is odd, but it really tastes great at the end as a sort of seasoning).

For this particular instance, I did use whole-grain spaghetti instead of vermicelli, which was fine, but vermicelli does give it more originality. Conversely, thin spaghetti or even angel hair pasta is fine. Whatever your preferred noodle is, this recipe is fairly easy to make and so very tasty!

Be sure to have a large bowl on hand in which to put the ingredients in after they finish their turn in the skillet/wok. After frying them all individually, toss it all back in and fry just to make it up to par in terms of temperature. 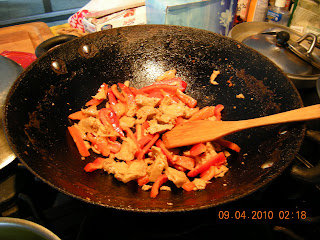 I over-fried the tempeh a bit…

Having a large bowl on hand makes it so much easier.

I like frozen peas vs. canned. Just boil a little and stir ’em in!

Make sure to thoroughly combine the ingredients.

Finished product! Don’t forget the cilantro and scallion garnish, they really add to the overall palate of the dish.

One of my favorite things to do is bake. A few days ago, I decided to make some peach pie, straight out of Colleen Patrick-Goudreau’s fabulous book, The Joy of Vegan Baking. To make the pie, she recommends you to chill all the ingredients before assembling the crust. This is pretty crucial, since the warmer […]

So it’s midnight, and sure enough, I feel an onslaught of munchies. What a better way to sate those munchies than with some delish Rice Crispies, Vegan-ized? Here’s what you’ll need: – About 8 cubes Sweet & Sara vegan marshmallows (so good! :) ) – 2 tbsp Earth Balance buttery spread (stick form is the […]

Hello fellow veganites and omni readers! This will be my first posting on all things vegan, and what a better way to start than to post a recipe? :) Here is what I made for lunch today: Whole-Grain Penne with Pesto sauce, Sauteed Broccoli, and Reduced Indian BBQ Beech Mushrooms: Ingredients:– 1 cup Broccoli, washed […]