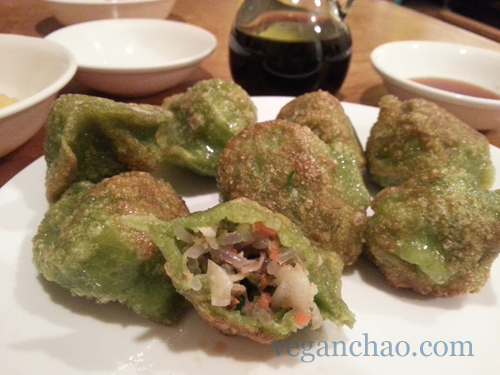 I always feel like it’s a small victory when I discover a restaurant that isn’t vegan… but has really great vegan options. That’s why I was so thrilled when I stumbled upon Mandoo Bar in Ktown (or as nonlocals call it, Korea Way) and found that I actually really liked their veggie offerings.

This place is quite famous for their homemade dumplings, which did not disappoint. I ordered the 8 piece veggie goon mandoo, which had a nice, cushy spinach wrapping that had clearly been freshly made, and retained an elasticity that gave it an unforgettable texture.

The dumpling skin was also fried on all sides, giving it a great crispy, bubbly outer shell that was a nice contrast to the softness of the original cooked skin.

The filling seemed to be a hearty combination of clear rice noodle, carrot, daikon radish and green bell peppers, which really hit the spot. I was almost full after eating just half the portion!

I would recommend ordering the 8 piece mandoos (the Korean word for “dumplings”) instead of the 4 piece, since you save about $1.75 if you get the bigger portion. Plus, I’m just a dumpling hog like that.

After such a satisfying appetizer, I didn’t really think my actual entrée would be topped by those awesome dumplings, especially after reading the item description on the menu:

Sounds pretty unremarkable, no? I’ve seen quotidien menus with noodles of this same exact description, and pretty much the same ol’ recipe: oily, flaccid, tasteless (or too salty) noodles with your standard melange of stir-fry appropos veggies: bell peps, broccoli, mushrooms, whatever.

But I was shocked to be presented with such a tasty, drool-inducing,  must-have-again noodle dish. I don’t know what they put in it to make it smell so good: the aroma actually reminded me of seafood, to be honest, and I got a bit suspicious… but there really wasn’t anything in it except noodles and veggies. Magical noodles and veggies.

First off, the noodles were perfectly cooked udon noodles– and I’m not exaggerating when I say they were, in fact, perfect. It had a springy, slide-down-your-gullet elasticity that must’ve taken years to master the art of. I mean, all the udon I cook at home comes out either too firm or doughy, which is why I tend to avoid udon dishes when I eat out. Good thing this was pretty much the only vegan option– and I’m not griping about that AT ALL.

The flavor was hard to describe: all I can really say is that the dish must have a lot of umami going on, or else they might have added a lot of MSG. If they did, I could care less, since they did it so amazingly good.

The vegetables themselves were also carefully cooked, not mushy at all and expertly sautéed. The dish was oily, but it wasn’t distracting. There was just enough to lubricate the noodles, without that gross gathering of oil at your lips when you slurp down a noodle, which happens at so many other places.

Mandoo Bar is one of those hole-in-the-wall places that might seem nondescript at first, but upon closer inspection, actually has quite a following. Newspaper clippings of reviews are plastered outside their door, and there is usually a bit of a wait… we waited about 8 minutes to get in, which actually wasn’t so bad, considering there were about 5 people in front of us (it was a Saturday night) and then another party of 7 that came in after us.

The line moves very quickly. I liked that they didn’t ask to group people together into one table as a lot of restaurants do, as I hate sitting with strangers.

Overall, the atmosphere is pretty unremarkable: exposed metal ventilation tubing runs along the ceiling along with some industrial heat fans, and it’s wall-to-wall cafeteria-booth style seating with an alley in the middle to get to your table. It doesn’t bother me though; I found it to be a friendly, cosy and busy place that would be ideal for a reasonably priced meal and great portions.

There is a moderately-sized bathroom in the back that has some modern fixtures (a stone-bowl sink and marble countertops) that really threw me off because it contrasted so much with the overall ambiance of the restaurant, but it was pretty clean so I can’t complain.

The service was also stellar, waiters were quite busy but still attentive when you needed something, and quick with getting you what you needed.

I really, truly enjoyed eating at Mandoo Bar, not just because it delicious, but also because they scored big points on both service and pricing. Plus, nonvegans can enjoy it just as well– after all, it is a “regular” eatery… with the rare vegan dishes that actually taste like, you know, food.