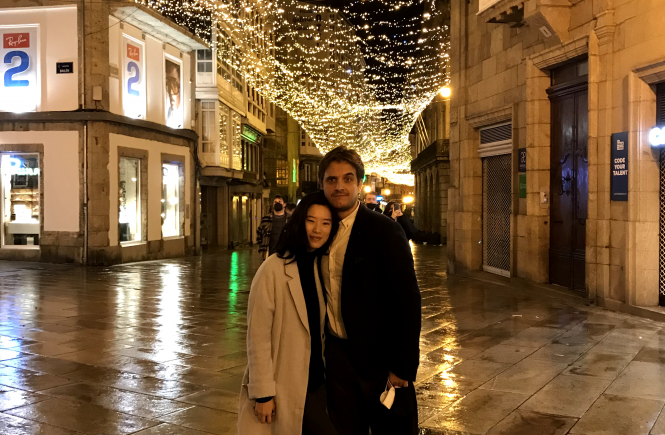 Once we safely arrived in La Coruña, I was eager to explore any new vegan businesses in the ‘hood. These are listed from least favorite to most in a shameless attempt to make you scroll down.

My least favorite meal was a delivered one; though I’m not sure if it was because it was delivered that made the meal so awful (I think not).

What I disliked most about my meal was their fried rice — it was too oily, salty and just not tasty. Everything else was unremarkable. This one can be skipped.

Technically Lola Organic is in Santa Cruz, which is still in greater La Coruña, so I am including it here. I found this cafe to be airy, light-filled and full of small bite vegan items.

As far as actual food, Lola isn’t really the place for a meal, more so a toast, chia yogurt parfait or a quality cup of coffee. Their toasts are really good though… I opted also to include some banana-bread slices as a “toast” to pair with my tea.

The first place we ate out was a fast-casual type pizzeria with a good variety of pizza flavors. They also were on Too Good To Go (though I am conflicted about using TGTG regularly, in Europe it is useful since it’s tougher to successfully rescue food) with specific locations participating.

We tried all their slices (each slice is pretty thin though large) and loved nearly all of them save for one (not sure what it was called, but it had sausage and corn kernels on it).

Of course, no vegan Coruña trip would be complete without a visit to Factoria Verde, the only dedicated vegan shop in the city.

In addition to selling pantry and premium refrigerated goods, Factoria Verde is also a bit of a restaurant. I say “a bit” because it is also a bit overpriced for the portions you get.

For example, a plate consisting of 8 mushroom pieces cost 11.95 euros, nearly 2 euros a mushroom piece (like half a mushroom). Pretty damn ridiculous considering it wasn’t a fine dining establishment or anything. At least it was very tasty.

Considering this was a typical street bar, I was surprised they had the vegan items that they did! There were several shareable finger foods to choose from.

I really enjoyed noshing on these patatas bravas, which were topped with a sauce that tasted like sriracha mixed with ketchup (genius move). They were perfectly crisp and soft in the middle.

At 2.30 euros and with way more mushrooms, this dish was a WAY better deal than the 12 euro mushroom plate at A Factoria Verde. It was also damn tasty. Maybe I should just eat at bars from now on.

For the piece de resistance of the night, we had nachos topped with generous dollops of guacamole and spicy mayo. I was truly skeptical they were vegan, but the staff assured us they were. The chips were also delicious and though I didn’t confirm with the staff, I suspect they were housemade.

It seems the the typical thing in European countries is that the Asian restaurants usually have vegan options (which is totally a-ok with me!). Roots is more like a ramen-inspired type of restaurant, which is already quite impressive for Coruña.

I will say that for what you get, the dishes are pretty overpriced. The noodles are like Top Ramen quality type noodles and just have a few chopped veggies splooted on top for SEVEN EUROS. But hey, inflation, supply-demand, etc etc so oh well.

You also get ripped off when you buy the bao, which is rightfully tasty but again, super overpriced. Methinks I need to be opening my own overpriced vegan Asian eatery in La Coruña, god knows I’d make a killing. At least it comes with a few paltry patatas bravas.

Vegan sushi… in La Coruña?! Yes, you absolutely read that right! Not only is there vegan sushi available in Coruña, but it’s actually REALLY GOOD.

Yes, I know, I was shocked as well. I found them on Happy Cow, like most of the restaurants in my review and wasn’t expecting much.

To my surprise, Fujiyama has a dedicated separate vegan menu and the staff is very knowledgeable about veganism!

Vegetariano – deep fried tofu nuggets with a crispy dough filling, really loved this decadent version of bastardized sushi (I draw the line at sushi pizza lol). The tofu “nuggets” were more like puffed tofu skin with a touch of sweet bbq sauce (they were sorta airy and hollow inside) and had a chewy-soft feel. The sushi roll themselves had that crunchy dough (similar to a Chinese cruller/yo tiao consistency) with the soft rice outer sushi shell, which made for a fantastic texture play. They were topped with white sesame seeds, yum!!

Kari Kari – fresh seaweed avocado wrapped roll with veggies, this was a super refreshing roll to eat in between the more heavy (albeit delicious) vegetariano roll.

California – classic cali-style roll with soft tofu instead of crab meat, it’s always nice to have a familiar taste and Fujiyama’s version certainly hit the spot.

My absolute favorite restaurant in Coruña is one that I visited in the past! They added a ton more vegan menu items, all of which are damn tasty.

You can tell their flatbread is premium and handmade, from the dough to the toppings. I loved the level of crispy/soft in the crust and the amount of cheese to the rest of the toppings was perfect.

Somehow the way they cook fries in Spain makes it special… they are at once crispy and soft, with an almost interesting foam-like texture. I guess I like analyzing my fries.

Raxo is a dish that originated in Galicia and is traditionally made with pork loin. The meat-sub Abbarote used was super tasty, kind of like a kebab-type with pepper and paprika. We love ordering it whenever we visit, since it was a staple of Juan’s childhood.

Whatever they did to make these croquetas, I wholeheartedly (and tummy-ly) agree with, because they are super delicious. Crispy and crunchy crumb crust on the outside, cheesy and savory melty goodness on the inside; they’re super addictive yet filling. I am in love.

These elegant empanadas did NOT let me down. They were filled with cheese and veggies and served piping hot.

The bun makes the burger, a mantra I have always abided by. The buns used at Abbarote are rustic, soft and just a little toasted. They elevate the burger to its rightful heights as one of the yummiest burgers in Spain (and possibly of all time!). I also loved the addition of a smear of guac and aioli. At 7.50 euros, it’s only .50 more than Root’s bao and WAY more filling!

So sad that at the time of this posting, this little bakery with delicious vegan treats has closed (announced on Jan 27th on their insta).

I was lucky enough to try their vanilla cupcake topped with caramel sauce and their chocolate mousse cake/tart with fresh berries before they shuttered. Both were delectable and barely tasted vegan, in my expert opinion! Hopefully they continue to use their baking talents in a future bakery endeavor (at least my greedy tummy hopes so!).

During the holidays, Coruña has a small variety of street stalls that have some vegan treats! Here were my picks.

Best eaten immediately and preferably on a not-windy day (which I learned the hard way).

These smoker-equipped little stalls pop up just in time for the holidays. They are basically roasted chestnuts, nothing more, nothing less!

Not necessarily a holiday treat, more of a year-round indulgence native to Spain, I always make sure to eat these several times when I visit!

This is a sweets shop with a wide variety of chocolate-covered vegan treats, such as blueberries, cranberries, bananas and, of course, raisins (my favorite) along with nuts (hazelnuts and peanuts are two of my faves). An easy grab-n-go snack!

This little ice cream shop boasted lots of vegan flavors, though they were out of most of them (so much for the boasting!) when I visited. They did have a vegan TGTG bag, the contents of which you can check out below. Each TGTG bag came with a mango sorbet pint and 4 pops of each flavor (mango and strawberry, which were delightfully soft and creamy, though there is no plant milk, so not sure how they achieved that!).

I’m excited to see more vegan businesses thriving in La Coruña, as it seems there are now more young people living there (and, as you know, younger people are more openminded to alternative diets). Let’s see what’s in store (no pun intended) for the future! 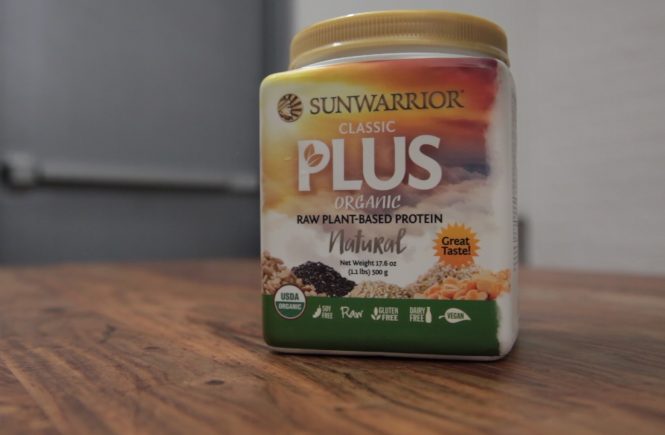 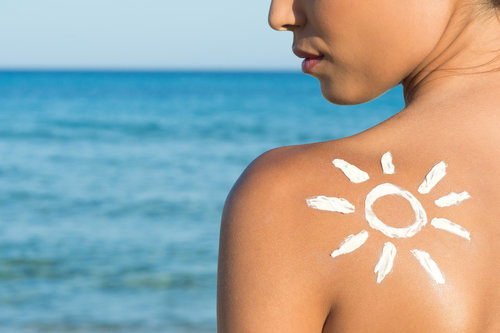 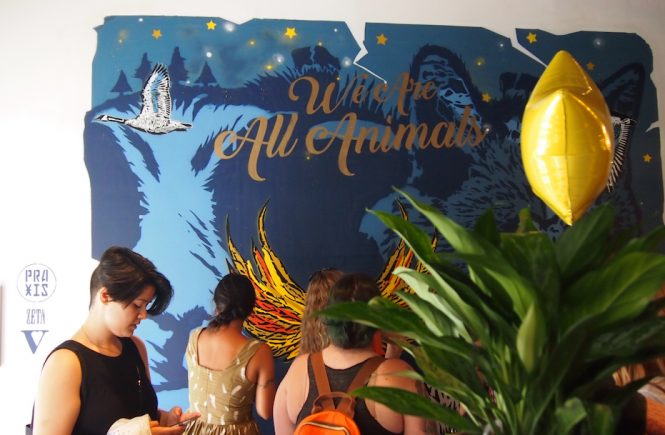